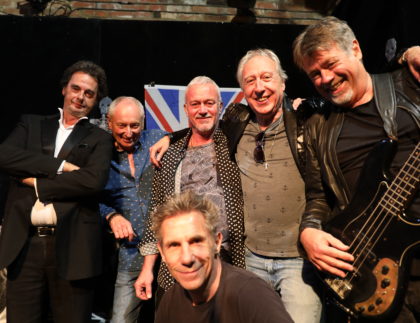 Category Rock
I started playing guitar at school (Christopher Wren in Shepherds bush) when i was 13, mum and dad bought me a “Raver” guitar from a shopping “pay weekly” brochure. My two brothers did the same and got me a small “Leo” amplifier..that was it…i was away. Strumming away for an hour in my bedroom every day,putting on Led Zeppelin/Black Sabbath/Journey songs on the record player..playing along and learning tricks etc from these guys. First school band “Stroller”..but didn’t go anywhere until at 16, formed a rock band called “Thunderchild” this went on for 4 years playing debut gig at Shepherds Bush pub The Trafalgar” then, after a few more gigs and some recording..went off to L.A. to team up with a rhythm section out there, and won the “Battle of the Bands” contest at Gazzaries club on the Sunset Strip. Throughout this time playing in LA….London was starting a Punk Scene..headed up by the Sex Pistols. I returned from LA and teamed up with Sex Pistols inventor “Wally Nightingale”, Wally lived at 51 Hemlock Rd, and I lived at 49..although we did play a bit together before forming “Key West” as Wally was expelled from The Pistols because he could actually play properly, leaving “Steve Jones” as the permanent guitarist. Key West featured Gary Martin (actor) on vocals. And Wally Stocker(The Baby’s guitarist) younger brother Bobby on drums. After many gigs, a contract offer from Warners and some recordings, we fell out over band members abilities..so i was off again..forming “Stand Back”. Stand Back did a few gigs/festivals, and recorded a single “It’s really got a hold on us” back in 1984. at that time…along came Mickey Simmonds. my best friend and “best man” duties incurred. Mickey was just back from touring with “Joan Armatrading” when we met..and he was involved as a member of Stand Back as a session keyboardist/producer/Arranger. I joined “FastBuck Studios” as part owner with Harvey Hindsley (hot chocolate) and Ed Hamilton (vocalist in Fastbuck)..clients included “Status Quo”, Whitesnake, Leeson and Vale amongst many other acts. Stand Back fizzled out…Then teamed up with “Paul Flood” at weekends for small gigs…Along came an opportunity to join “The Renegades”. Joining “Dermot Siney” as twin lead guitars in the renegades..we gigged every week all over London.. eventually appearing on “The Live 6 Show” on Channel 4 and winning “Band of the Year” in a Daily Mail competition doing very high crowd capacity gigs at some major events around the South of England. There is a web site “www.therenegades.org”…after 16 years as a twin lead band..we disbanded in 2010. Threw myself into my graphics business (RE Graphics Ltd) for a few years (but still played at weekends with various friends)..doing high end graphics for some top acts incl, Led Zep,Bruno Mars,Ed Sheeran,Pink Floyd, then…I decided to go it alone. I recorded my first album “Absolute Zero” in 2011..and followed it in 2016 with “Can you Just” both available on itunes/spotify. Mickey Simmonds produced both these albums from his studio in Hersham. We just finished Album no 3 (In this Life). With Mickey doing all Production/Arranging and some co writing. The Movie “Gloves Off” released Sept 2018..features two songs from these two albums. “Place in my heart” from Absolute Zero and “Stop the Love” from . . .” Can you Just” albums.
